As piano builders and rebuilders, we have inherited a crude and archaic system for measuring the balance of
the action mechanism.  The weight of the hammer, which sits out on the end of a long lever arm and has
such tremendous influence on touch and tone, is measured in weight to the nearest pound of a sheet of felt
from which many sets of hammers are made.  We assume the proportion of key to hammer movement is
roughly 1:5, but have no reasonable means for accurately measuring this ratio or detecting leverage
problems.  The keys are "balanced" using downweight as a primary indicator but "balance" implies a state of
static equilibrium and downweight is taken from the moving key.

A New System Of Weights & Measures

I have found answers to these and many other questions' by inventing a new system of weights and
measures.  Metrology is the science of weights and measures so I call this system "The New Touchweight
Metrology."  The units of the New Touchweight Metrology define the balance of the upwards and downwards
static forces at the front of the key as contributed by the weight and leverage of each action component.  The
piano action may seem like a complex mechanism but in fact it acts as a simple lever that propels a hammer
into the string. It functions as a catapult, with a short lever arm on one side of a pivot and a long lever on the
other.  The long lever arm is shortened into what engineers call a "folded beam" by use of the wippen and
shank levers.  The New Touchweight Metrology takes the folded beam of the action and "Unfolds" it into a
simple balanced lever such as the scale you might find in your doctors office, where: 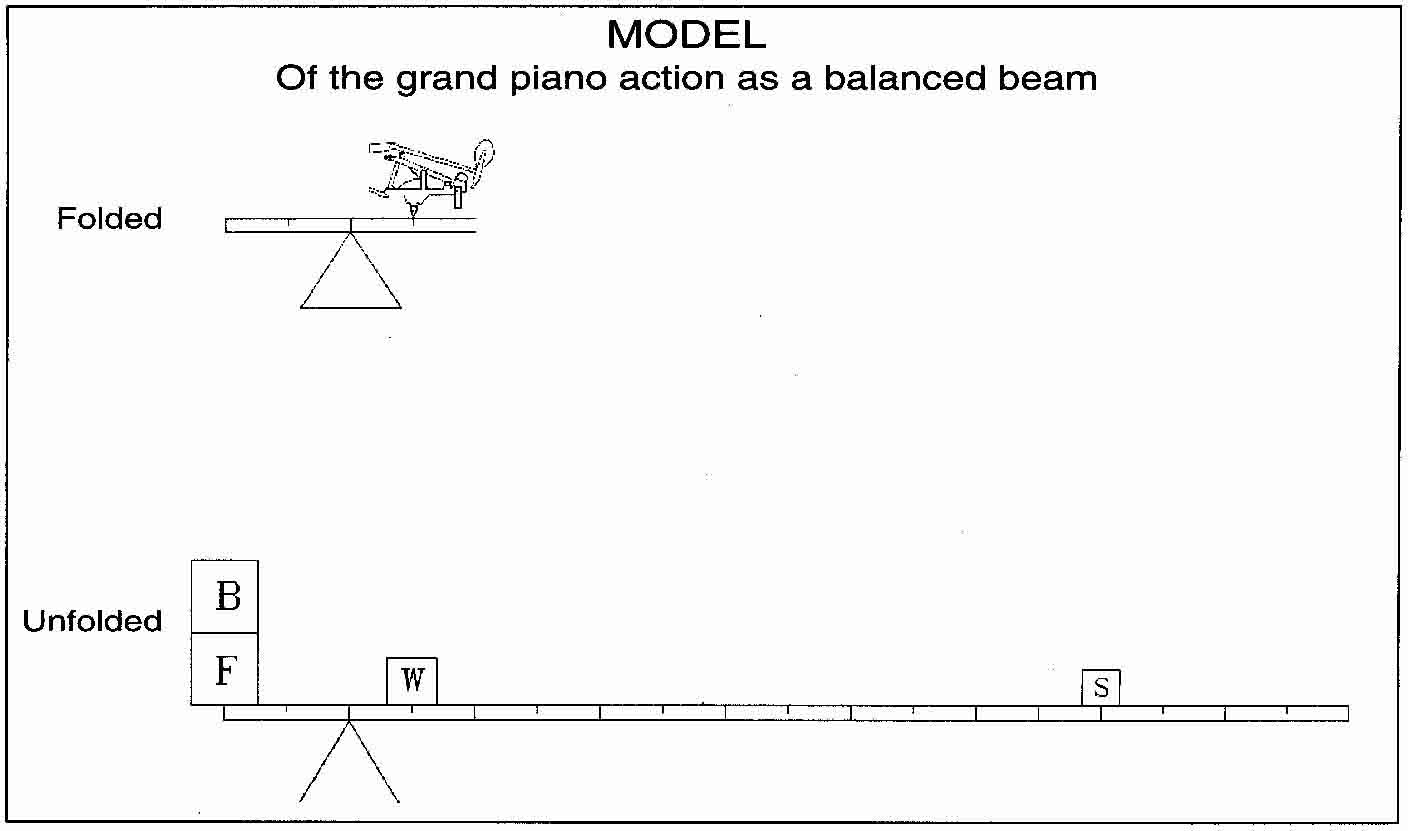 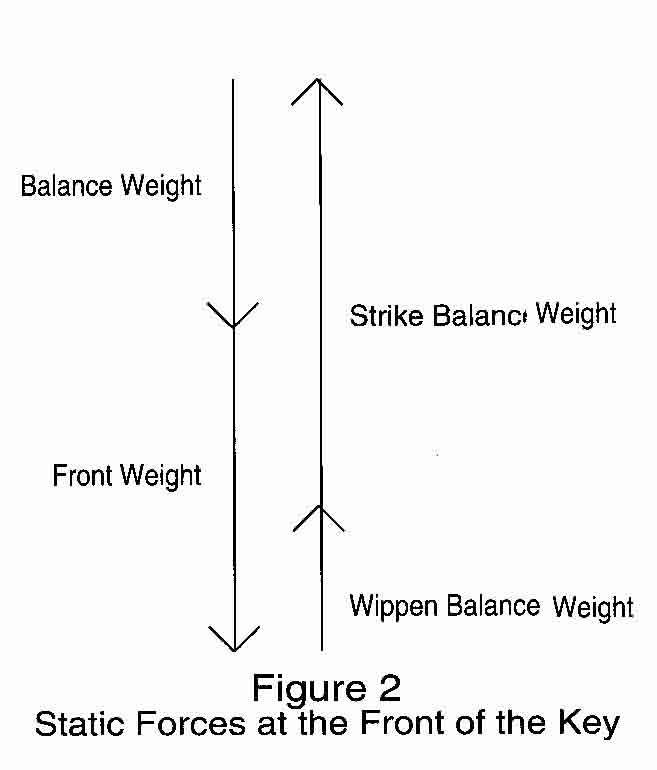 Definition & Determination Of The Units

When measuring UpWeight and DownWeight the touch weights are placed on the key centered on a point
13mm in from the front vertical edge of the key.   When the balance weight is placed on the front of the key it
is balanced and motionless as if it were a balanced scale. Additional weight must be added to the balance
weight to overcome friction and start the key moving down (DownWt) and weight subtracted from the
balance weight to start the key moving up (UpWt).

Front weight is found by placing the key on a wedge pivot so that the balance hole is centered across the
edge of the wedge.  The front of the key rests on a roller bearing which is on the pan of a digital scale.  The
key is oriented in a horizontal attitude similar to that when the key is at rest in the assembled action.  The
roller bearing rests on a vertical axis through a point on the surface of the key 13mm in from the front vertical
edge of the key (see Photo I). 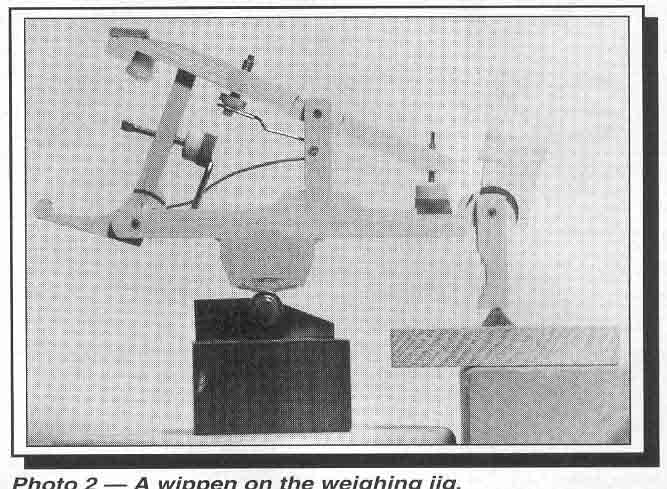 Strike Weight- The hammer weight plus the radius weight of the hammer shank, pivoted at the hammer
flange, taken at Strike Line Radius.  The strike line of the hammer rests on the felt wedge block and the end
of the tipped up flange rests on the roller so that the flange center aligns with a vertical axis through the
center of the roller. The height of the roller is adjusted so that the shank rests horizontally. Playing cards can
be helpful as shims (see Photo 3). 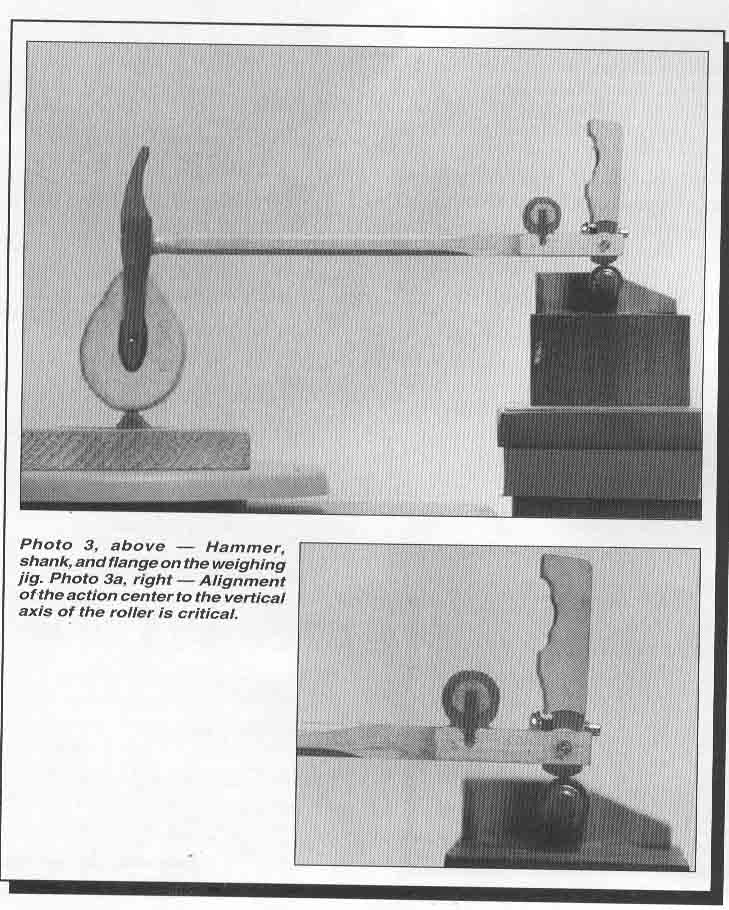 Key Ratio- The ratio of down- wards force at the capstan to the corresponding upward force at the front of the
key.  The key is set on the jig as for weighing front weight.  An amount of weight is placed on the front of the
key to make the front weight at least 70 grams.  This weight holds down the front of the key. The scale is
then tared to zero. (Digital scales have a tare button which makes the scale read zero, regardless of what
weight is on the pan.) Two 50-gram weights are placed on either side of the capstan so that there combined
center of gravity is at the capstan/heel contact point.  The scale will then read how the 100 grams translates
to the front of the key.  For instance, if the scale reading were -57.0 the key ratio would be 0.57 (see Photo
4).

Wippen Balance Weight- The upward static force at the front of the key from the leveraged weight of the
wippen. Found by calculating:

Top Action Balance Weight- The total upward static force at the front of the key resulting from the leveraged
weight of the wippen, hammer, and shank.

Strike Balance Weight- The upward static force at the front of the key from the leveraged weight of the
hammer and shank.

Strike Ratio - The amount of weight to balance one gram of strike weight at the front of the key.
Found as:

1. To the best of my knowledge, the Balance Weight value was first described by Don Galt, RPT, in
"Resistance in Piano Action," in the April, 1969 issue of the Piano Technicians Journal.  He called it Weight
Resistance.  In the October, 1990 Journal is published a method for balancing keys to a specified Balance
Weight, by David C. Stanwood, RPT.

2. For this work, a scale needs to have 150-gram capacity and resolution accuracy of 0.1 gram. The roller
bearing shown is an "idler bearing," which can be purchased from small parts component suppliers. In a pinch,
an edge-trimming router bit can be used.

3. In all cases it is only necessary to carry the decimal to the nearest tenth except for the "key ratio," which is
carried to the nearest hundredth.